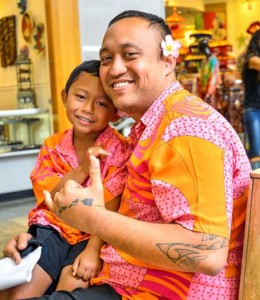 The Mission
The mission of the Hawaii State Commission on Fatherhood (COF) is to promote healthy family relationships by emphasizing the important role fathers play in the lives of their children. The Commission serves in an advisory capacity to state agencies and makes recommendations on programs, services, contracts, policies, and laws relating to children and families.

About the Commission on Fatherhood
An increasing body of evidence indicates that children are more likely to thrive with the support, guidance, and nurturing of both parents. Yet, many children across the country are growing up without fathers. As a result, they may lack appropriate male role models and face greater risks of health, emotional, educational, and behavioral problems during their developmental years.

Motivated by a renewed understanding of a father’s vital role in family and community life, the 2003 Hawaii State Legislature established the Commission on Fatherhood through Act 156; in June 2007, Hawaii Act 190 made it permanent.

The commissioners operate independently, but the commission is administratively attached to the Department of Human Services.

The State of Fathers in the State of Hawaii (2015) – A collaboration between the Commission on Fatherhood and the UH Center on the Family, the study provides a snapshot of the state of fathers across Hawaii. The study also identifies the number, characteristics, and geographical distribution of fathers, and highlights differences and similarities between Hawaii and mainland populations.

The State of Fatherhood Programs in the State of Hawaii (2019)– This report is the product of a second collaboration between Professor Selva Lewin- Bizan from the University of Hawaiʻi at Manoa and the Hawaii State Commission on Fatherhood. This report assesses the availability of programs aimed at supporting the population of fathers throughout the state. The report summarizes information collected during 2016 and 2017 from individuals working in 32 organizations that report offering social services, with the purpose of outlining information on existing fatherhood programs.

Do you have any questions about the Fatherhood Commission?

Want to Serve as a member of the Fatherhood Commission?

Commission Meetings
COF monthly public meetings are held on the 3rd Friday of each month at 1pm.  Meetings are currently being held on Zoom due to State COVID-19 guidelines.  Please register with ehawaii.gov and check the calendar for more information and meeting updates.

Click here to register for the COF meetings and for more information.

Funding
The Commission on Fatherhood receives both State and private funds. HRS § 577E-7 provides that: “The commission shall administer funds appropriated or allocated for its work and shall be authorized to accept, disburse, and allocate funds that may become available from other governmental and private sources; provided that all such funds shall be disbursed or allocated in compliance with any specific designation stated by the donor and, in the absence of any specific designation, the funds shall be disbursed or allocated on projects related to any of the purposes of this chapter.”